Hiking Trolltunga has been on my bucket list for SUCH a long time, and last weekend I finally ticked it off! I had seen pictures of that famous ledge all over Pinterest and Instagram, and thought “I need to do that hike“. While chatting to my friend and fellow wanderluster Lakshi (who also writes an awesome travel blog with her husband Andrew), we realised that we had both been lusting over that view on social media, and decided it would be super fun to go together!

We started doing our research and quickly realised that the hike wasn’t going to be an easy feat. A 28km round trip up to 1100m above sea level has earned the Trolltunga trail a difficulty rating of black, which is as hard as it gets. In fact you’re only allowed to hike alone between 15th June – 15th September. So, we decided that the August bank holiday was the perfect time to go!

The four of us flew to Bergen, rented a car, and drove out to our little AirBnB in Odda on the Hardangerfjord. We were incredibly lucky – according to our host we had the best weather they had seen all summer. We woke up at 5AM and were treated to this glorious sunrise over the fjord.

We drove to the Skejeggedal parking lot, where it cost us 300NOK to leave our car for the day. After using the facilities (it’s just you and mother nature once you’re on the trail!), we started our hike at 7:20AM. I read a lot of blogs and watched heaps of youtube videos before our trip, all of which mentioned the dreaded first km. Luckily for us, we walked up a newly built road that was less steep (although… not exactly EASY!) and now extended over 3km. Thanks to the new road, the hike to trolltunga was now 14km up, and 14km down. So 28km overall. Fo’ SHO’ the longest and hardest hike I’ve ever done. I’ll be honest, I was secretly wondering/doubting whether or not I was fit enough.

When we reached the top of the road, the trail opened out into a gorgeous valley, with a few holiday homes dotted around (I bet their owners are glad about the new road!). This part of the track was mainly flat, just a few bridges and rocks to navigate our way across. 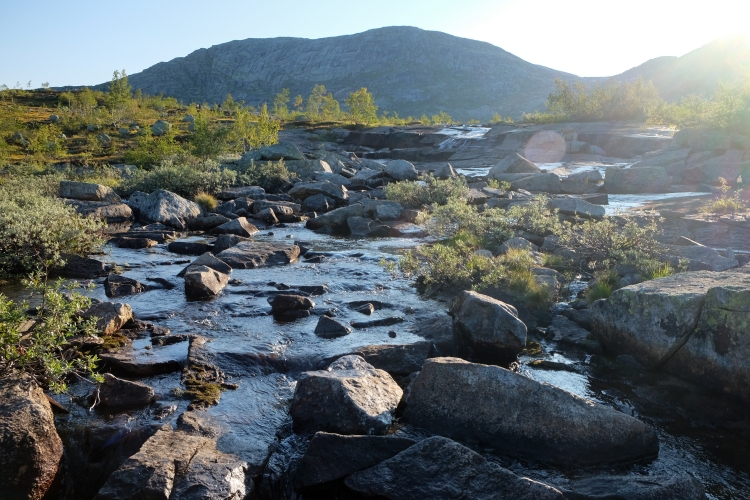 Once we made it across the valley, it was time for the next uphill stretch! This part was originally the 4km mark, but thanks to the new road was now at around 7km. This part was HARD. For me, I didn’t mind the rocky parts, because they allowed you to climb. It was the sheer sloped rock with nothing to hold onto that got me. It was at this point that the voice inside my head went “hmm… might have been a good idea to do some training for this Kimmy…. ‘. However, when we reached the top of the climb, the view back over the valley was spectacular, and the view going forward was even prettier! (I have to say, the views definitely kept me going along the way with this hike. So. Much. Pretty.) 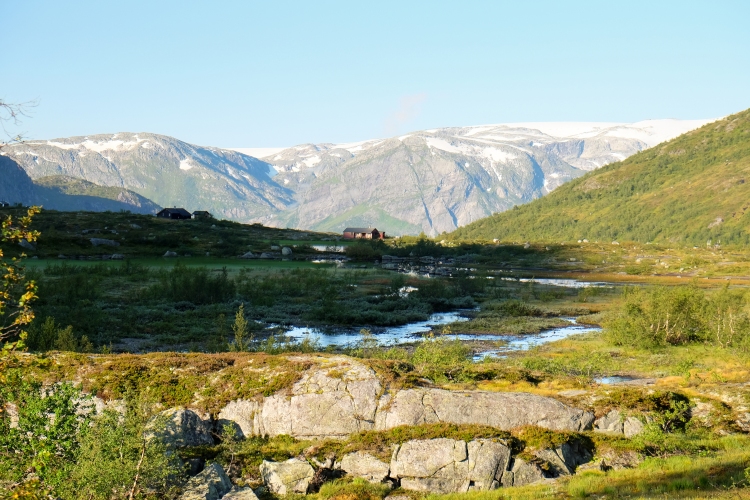 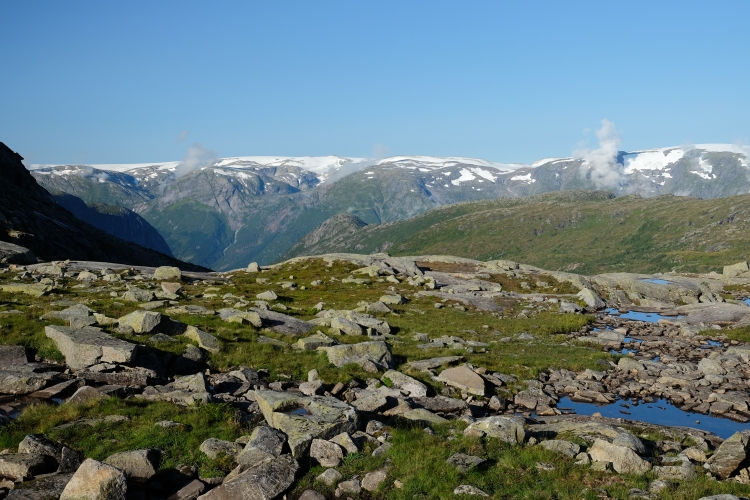 Now, I had read that after that 7km steep climb the rest of the trail was easy. I STRONGLY DISAGREE WITH THIS STATEMENT. Fair enough, that 7km climb was by far the worst bit. But it was by no means flat or simple from then onwards. We climbed more ascents and made our way through streams, but the views just kept getting better and better. My favourite view of the hike looked out over the fjord, which extended in both directions. 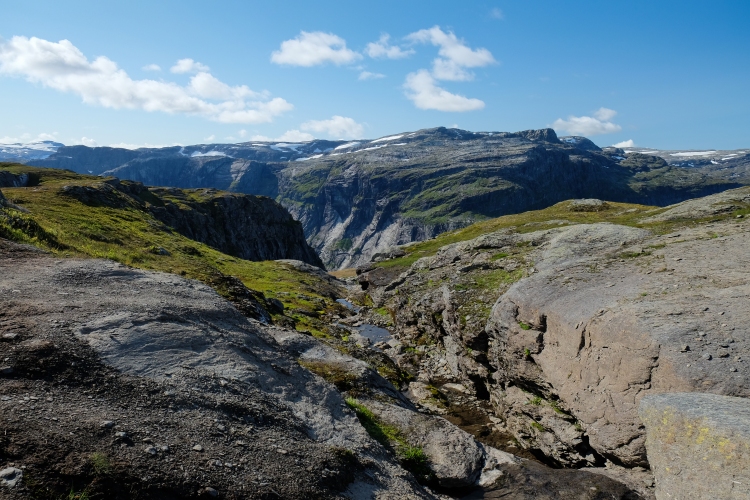 As we moved closer, my legs started to feel like jelly, and I was getting considerably sweatier and sun-baked (you can totally see this in my video diary by the way…. at the 2km to go point… my head is a shiny red ball with frizzy hair that isn’t even up in a proper ponytail, and I cant quite string my words together….hawt). But then, after 4.5 hours of hiking, WE SAW IT.

Despite the crowds (we queued for 2 hours!), it was 100% worth it. Stepping out onto that ledge was insanely cool. Also, not too scary. While I was in the queue I kept gasping when people got close to the edge, but once you’re out there you can’t see anything thanks to the upward angle of the rock! You just strike your poses, and say over and over to yourself in your head that you are STANDING ON TROLLTUNGA!

I have to say that despite the long queues, people were so respectful and courteous of one another. There was a sort-of camaraderie with everyone respecting everybody elses moment on the tongue. We all earned it – big time. While I was taking photos for our friends, the worst thing happened – their SD card ran out of memory!! I yelled this out loud, and heard a collective gasp from everyone in earshot. One lovely lady even offered to take photos on her phone for them. Luckily Aled was snapping away on my camera so they still have loads of pics.

We actually spent another hour up at trolltunga (so 3 hours in total), plastering blisters and taking in the view of the fjord from the rock above the tongue. I’m not going to lie, I was also putting off starting the trek down. At that point the thought that I was only halfway there was a bit too much to handle. But if there is one thing I learnt on this hike, it’s that these things really are mind over matter. No way would I have thought I was capable of a 28km, 12 hour, black-rated hike. But I did it. Just by putting one foot in front of the other. Sure, my body ached like a b**** for the next 4 days, but it was 100% WORTH IT. 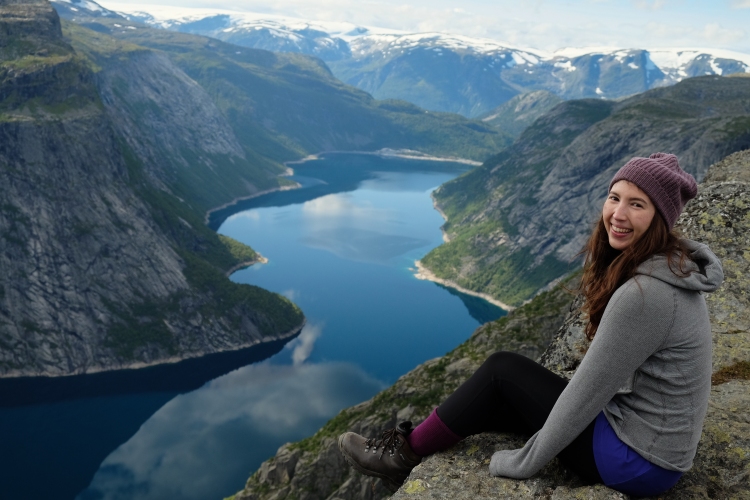 You can watch my video diary of our trolltunga hike (plus some other clips from our trip) here:

Other posts in my Norway Blog Series (coming up!):